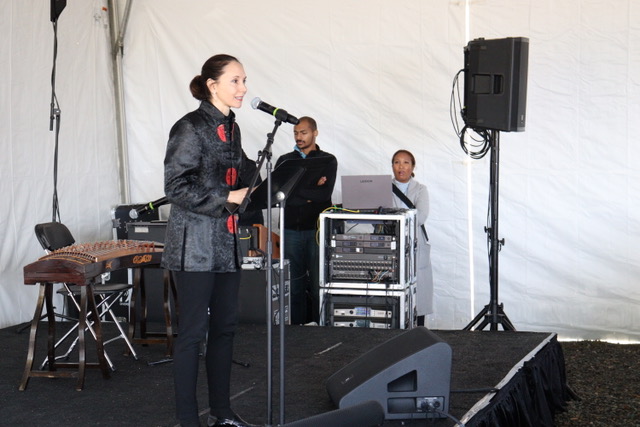 Sunny skies and a spirit of true togetherness greeted people of all ages, cultures and colors on Saturday morning, Oct. 29, for the much-anticipated Walk for Reconciliation Against Racism. A certain air of goodwill filled Tollefson Plaza as friends and strangers alike greeted and smiled at each other knowing why they were there and what it meant to foster healing in this era of heightened political division and racial tension.

The event was primarily a day of remembrance for the 137th anniversary of when every Chinese resident was forcibly expelled from Tacoma on Nov. 3, 1885. The particularly inhumane and violent way that city leaders at the time pushed Chinese men, women, children and elders out of town came to be known as “The Tacoma Method” and it was applied to other Chinese communities from Seattle to Olympia and down the west coast. The walk was also a day to reclaim that chilling term and build a new meaning based on peace, unity, inclusion, and respect.

Later in the program, winners of the walk’s high school essay contest were brought to the stage to read their essays and receive awards. Then Symphony Tacoma Conductor Sarah Ioannides, librettist Zhang Er, and Pacific Lutheran University composer and music instructor Greg Youtz, who also serves on the Chinese Reconciliation Project Foundation board, talked about a new opera that Youtz and Er have written entitled “The Tacoma Method.” In her research, Er came across Mr. Lum May’s written court affidavit on what happened on that Nov. 3 of 137 years ago,making this opera based on the true story.