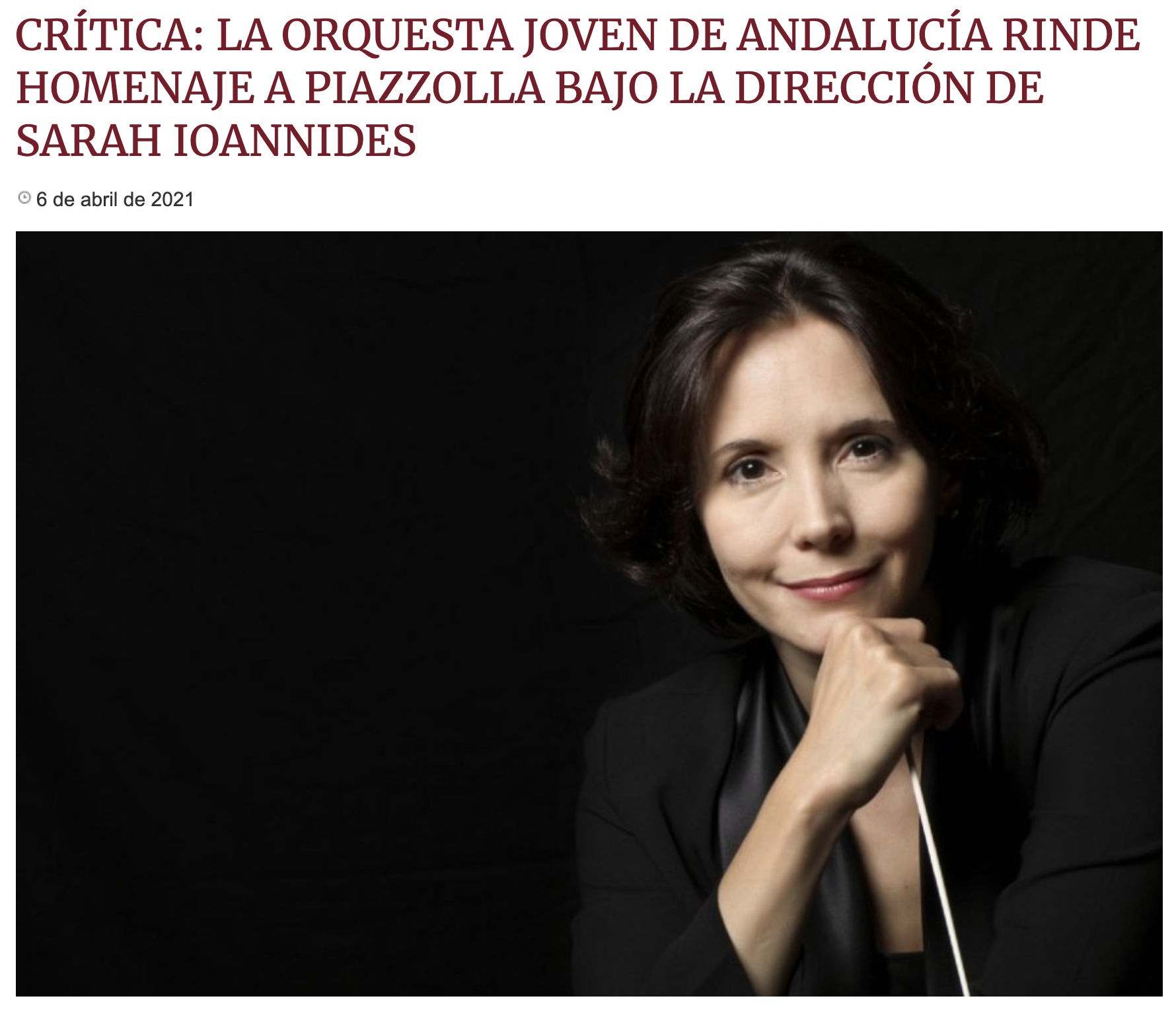 The spring course of the Andalusian Youth Orchestra (OJA) has been dedicated to the figure of Ástor Piazzolla, whose centenary of his birth was celebrated on March 11th. For this, it has had the participation of the Peruvian bandoneonist and pianist Claudio Constantini, an outstanding interpreter of the creations of the Argintinian composer, who came to transform tango without losing its essences and particular the milongas connections between its varied ethnic and folkloric expressive assumptions, reaching to be a figure of reference in the most genuine musical genre of Argentina.

The performance began with the world premiere of the Buenos Aires Concert (Tribute to Ástor Piazzolla) by Constantini himself, with which he has shown how, from the composition, he has entered the figure of that incomparable bandoneon master, by bringing to the orchestral dimension all the secret rhythmic and harmonic of this music and capturing its structure in the classical-romantic concerto style. Lasting over thirty-five minutes, it has a first Allegro movement, the longest, in which a central cadenza stands out with which the author has wanted to show the degree of virtuosity that can be achieved with this wind instrument-bellows, standing in the middle of the dialogue with the orchestra. Its fundamental, well-defined parts, developed thematic exposition, cadence and transformed recapitulation, delved the audience into the substance of how to play it with all the weight and kinetics that the performer’s body should give it, with a degree of tension that reached its climax in extreme moments of harmonic reaffirmation, accentuated with excited, lightning-fast and explosive adornments.

The second half, which is marked by Cantabile, develops with marked slowness. The string section acquires more prominence amplifying its harmonious speech in which the soloist integrates with varied echo effects that leave the listener with a feeling of serenity and complacency. Finally, the work closes with an Animato in which the syncopated variety animated its air until, in an attempt at metric decomposition, it led to its dissolution with distinguished emotionality. In short, it is a work called to be accepted by the Buenos Aires cenacles, which will determine the adjusted intention of its content and its contribution to the genre, presuming a secure installation in the particular tango repertoire. A throbbing and at the same time contemplative interpretation of that little jewel which is the evocative instrumental song Oblivion, which put the audience in direct contact with the spirit of Piazzolla, closed this part of the evening with great shudder.

The American vibe, but in the northern hemisphere, remained when Constantini switched keyboards to develop a performance that turned out to be academic of George Gershwin’s Rhapsody in blue for piano and orchestra. The sense was put by the guest conductor, Sarah Ioannides, knowing how to bring the orchestral instrument to that jazziness of the work from the difficult initial glissando of the clarinet, very achieved by the person in charge of it. The symbolism of this music took over the theater, causing the listener to imagine the famous big band halls in which the consumption of drinks was included for the spectators who occupied their tables and who at times danced on its central court.

The most outstanding performance of the night was led by a masterful conducting of Antonín Dvořák’s Symphony «From the New World». Starting from a deep knowledge of this work, this impetuous conductor, with a very solid British and American pedigree, deployed a great battery of technical resources, always at the service of the musical message, making the most from the orchestra during the preparation days towards this concert and assuming its pedagogical function as an essential factor in the assembly of this symphony, without losing at any time its defined and decisive artistic personality, which resulted in a great professional moment. The movement of her baton was integrated into the kinetics of her body, transmitting every detail with a clear sense of anticipation, sure pulse and balanced dynamic and metric proportionality, which left the sensation of an excellently worked and coordinated sound gear, all favored by the delivery and commitment of this new collection of musicians of the OJA, one of the cultural institutions that has been maintained by the Junta de Andalucía and that, together with the Young Choir of Andalusia, constitutes the central nucleus of the Andalusian Program for Young Performers that fulfilled its twenty-fifth anniversary last year 2019.

Once again, the objectives of this type of meeting were fulfilled given the enthusiasm of the musicians and the public fused in an intense collective ovation. The Villamarta Theater thus scored another success in its programming dedicated to music known generically as classical.