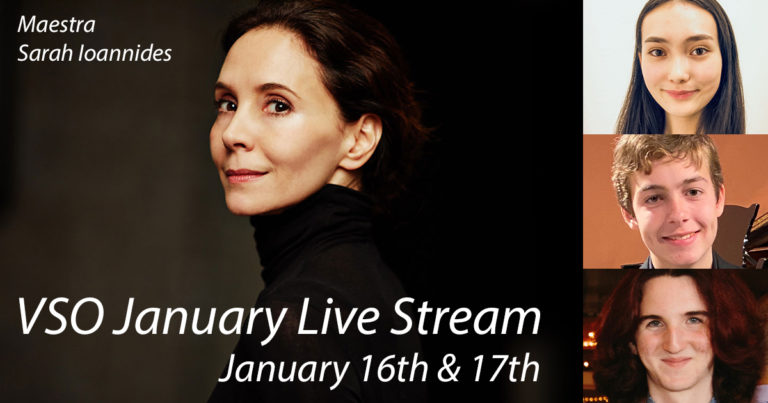 The Vancouver Symphony Orchestra continues its 42nd season with live streamed performances on Jan. 16 and 17 that will feature critically acclaimed guest conductor Maestra Sarah Ioannides of Symphony Tacoma. The concert will highlight the extraordinary talents of the 2019-2020 VSO Young Artist Competition Gold Medalists who were selected in three categories: Ben Price in the winds/brass category, Hanami Froom in the strings category and Jacob Nenow in the piano category.

Price will perform Oboe Concerto in A Minor 1st and 3rd Movements by Ralph Vaughan Williams, Froom will perform Chaconne for Violin and String Orchestra by Tomaso Vitali and Nenow will perform Piano Concerto in D Major 1st Movement by J.S. Bach. Other pieces performed by the Vancouver Symphony Orchestra in this program will include Samuel Barber’s Adagio for Strings, a passionate and sorrowful work that has become synonymous in popular culture with heartbreak, and Benjamin Britten’s Simple Symphony, an expressive, inventive work based on pieces the composer wrote in his childhood.

Maestra Ioannides was named by the Los Angeles Times as “one of six female conductors breaking the glass podium” and was included on Norman Lebrecht’s “Woman Conductors: The Power List.” She is now in her sixth season as Music Director of Symphony Tacoma, and is the Artistic Director of Cascade Conducting, an international masterclass held in partnership with Symphony Tacoma and Pacific Lutheran University.

The performances will feature a reduced orchestra and will be streamed live from Skyview Concert Hall without an in-person audience (in accordance with Washington State’s current guidelines). The broadcast on Saturday, Jan. 16, will begin at 6:30 p.m. with the fourth installment of the celebrated VSO pre-concert show Da Capo, hosted by VSO Podcast host Ashley Hall and VSO trombonist Greg Scholl. Intermission will feature special, not-to-be-missed interviews. The performance and the show on Sunday, Jan. 17, will also be streamed live and will begin at 2:30 p.m.

The previously scheduled performance of Mahler’s Symphony No. 2 with the PSU Choir and Maestro Brotons has been rescheduled due to COVID-19 restrictions.